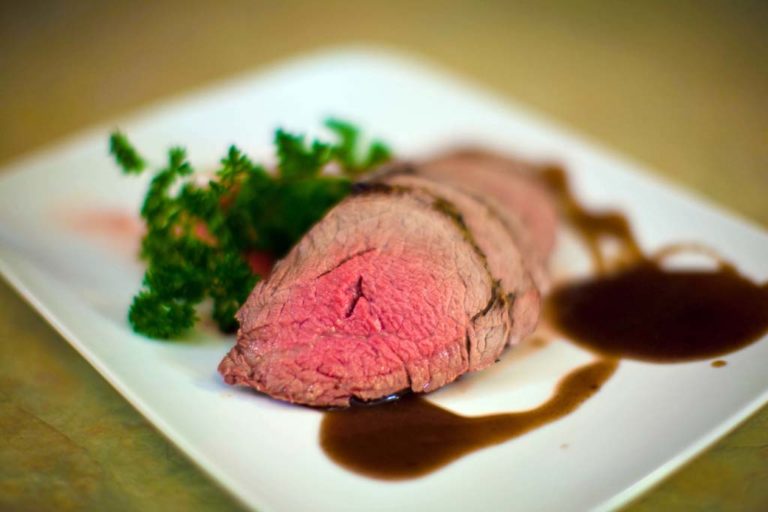 The beef tenderloin, also known as whole fillet, is located along the vertebrae, on the inside of the beef cow. Other cuts of meat that come from this short loin section include strip steaks, T-bones, and porterhouses. These last two cuts usually have a small portion of tenderloin attached on one side of the physical T bone. A strip steak is the same cut, minus the bone. Once trimmed and cut into a “dainty cut,” whole fillet of beef tenderloin becomes filet mignon. According to Larousse Gastronomique, the filet mignon is from the very center of the tenderloin, and triangle shaped. His description is lacking in detail, but it would seem that the trimmed tenderloin in the photo below is it.

Whole Trimmed Beef Tenderloin Recipe: Roasted on a Wire Rack in a Hot Oven with Sea Salt and Black Pepper

Put the first 6 ingredients in the bottom of the roasting pan while roasting the beef tenderloin. After cooking, drain the pan into a separate dish. Collect and add the juices left over from slicing the meat. Adjust the flavor with salt and sugar. Slightly thicken the sauce with a little corn starch or flour. Whisk in the butter at the very end. Serve on the side.