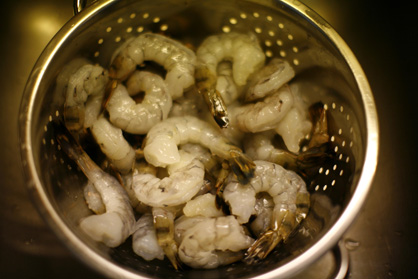 Although shrimp is a versatile creature when it comes to preparation, it is most frequently steamed or fried. Steaming shrimp is convenient because it cooks the shrimp without doing much else to it, allowing you to use it for a variety of recipes. From dipping cooked shrimp in a sauce of some sort or chopping it up for shrimp salad.

You could buy cooked shrimp from the grocery store, but chances are the shrimp were cooked months ago and have been in a freezer ever since. You also have no idea how fresh the shrimp were at the time of being cooked. I am not saying that precooked shrimp are inedible. I am simply saying that buying it would be a silly waste of time. And it is much better to buy fresh shrimp and steam them yourself. This way you know that the shrimp are fresh and freshly cooked. Below are two different methods of steaming shrimp—one is an electric rice cooker that doubles as a steamer and the other is a stove-top type steamer.