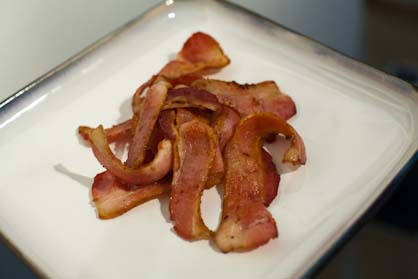 While bacon can refer to cured meat of several parts of a pig, in America it most commonly refers to the cured and smoked pork belly. The first step in curing pork is to rub it with lots of salt or soak it in a brine. Color fixatives like sodium nitrite and/or saltpeter are added to keep the meat nice and pink. The bacon is then usually smoked, dried or boiled. Flavors can be added during the brining portion and/or smoking portion. Common smoke flavors are that of different types of wood: applewood and hickory being two popular options.

Bacon can be made from several different cuts of meat. Streaky bacon, pancetta and American bacon come from the pork belly. Middle bacon comes from the side of the pig. Back bacon is made from the loin of the pig. Also called Irish Bacon or Canadian bacon, it is meatier and leaner than other bacon. Cottage bacon is thinly sliced lean pork meat from the shoulder of a pig. Jowl bacon is the cured and smoked cheeks of a pig.