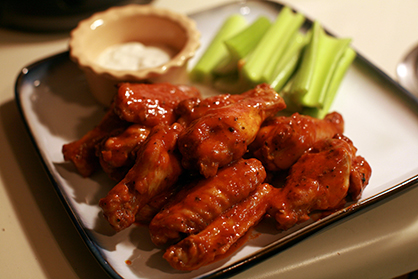 Chicken wings were commonly discarded up until 20 years ago. In fact, up until Buffalo wings became popular, wings were a lot smaller. Some chickens are now hybridized to have bigger wings. The wings of the old chickens were scrawny, puny little things and were rarely consumed. Except when they were used to make chicken stock, they were primarily eaten by impoverished people, most notably south of the Mason/Dixon Line.

Buffalo wings have a pretty set recipe and method of preparation. I have taken that method and made some modifications, the biggest being the addition of a dry-rub to impart even more flavor. Please continue reading below.